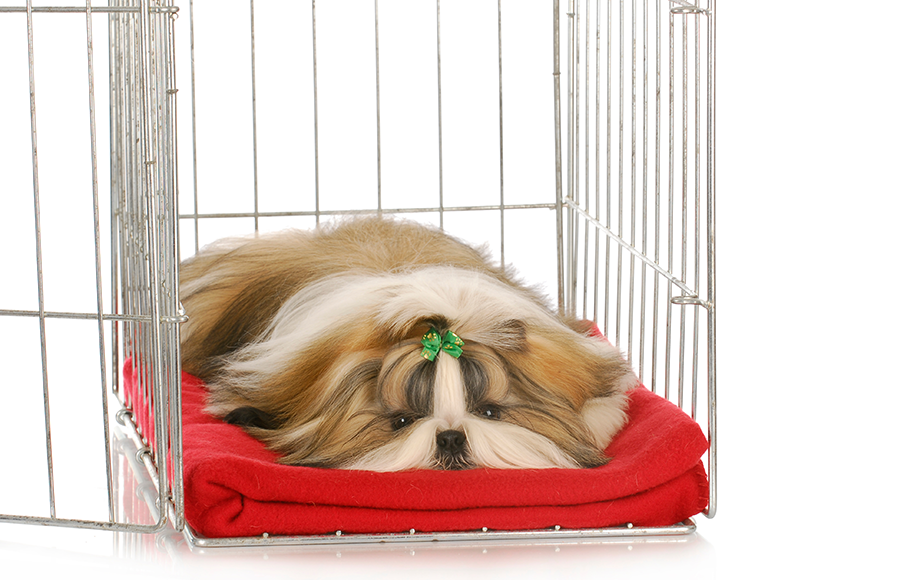 National Train Your Dog Month is an initiative by the Association of Professional Dog Trainers to bring awareness to the importance of socialization and training. They shared this helpful piece on crate training.

Why should you use a crate?
A crate can be an invaluable tool for teaching a dog to eliminate outside of the house, and is one of the quickest ways to help house-train a dog.
A crate can provide a safe haven for your dog when you need to be away from the house, or are too busy to supervise your dog.
When should you not use a crate?
If you are trying to punish your dog – the dog will learn to avoid the crate and refuse to go inside, or he will become extremely agitated in an attempt to be let out of the crate.
If you are looking for a long-term place to “store” your dog for hours and hours on end.
Ideally, an adult dog should not be left in a crate for more than four to ve hours at a time. For puppies, you cannot leave them in the crate longer than their physical bladder capacity, which depending on their age and breed can be no more than an hour or so.
Using crates to house-train your dog:
You can expect to teach an adult dog house-training within three to five days using a crate. Puppies, of course, will take longer due to their smaller bladder capability. The more consistent you are, the more you will see a difference.

Your dog or puppy should be kept in the crate any time that you cannot watch it 100%. This means that you are able to watch the dog at ALL times and move him quickly outside if he starts to eliminate. If your attention will be divided by tasks like cooking, talking on the phone, watching TV, etc, then do not crate the dog. Rather, use the “umbilical cord” method. Use the dog’s leash to tie the dog to you, either by looping the leash around your waist, or through your belt or a belt holder on your pants.

For puppies, release them from the crate approximately once every hour or so. You can go for longer but the more opportunities you give the puppy to be reinforced for going outside, the quicker they will learn. Take them IMMEDIATELY outside by running with them on-leash to your door and outside. Have some especially good treats on hand when you do this. When you are outside, try to stand in one general area and give your dog the cue (Go Potty!). Most puppies will eliminate within ve minutes of taking them outside.

If the puppy eliminates, give him some of the treats, praise him calmly and happily, and take him back inside. It is ok to let the puppy run loose in the house, as long as he is supervised by you 100%. After about an hour, you can put him back in the crate, and restart the whole process again within the hour.

If the puppy does not eliminate, take him back inside and put him in the crate for another 10 min. Say nothing to him and do not give him treats. Then take him back outside to the same place and try again.

If you are consistent with this pattern, your puppy will quickly learn that if he holds his urine and feces until you take him outside, not only will he get relief and be able to eliminate, but he will get a treat as well. As your puppy or dog starts
to demonstrate that he has learned the “rules” you can begin to phase out the food treats and replace with praise and petting, or play time with you or with a toy.

Using the Crate to “train” your dog to the house:
Always make the crate a pleasant place for your dog to be. If your dog is already house-trained and your dog is not a chewer, you can add some soft bedding, such as towels, blankets, or a dog bed inside the crate. Items that are soft that smell like you are particularly good for dogs that are newly adopted, as it will create a pleasant association for the dog with your scent, and this actually is helpful for dogs that are anxious when left alone. However, be sure to monitor this to make sure that the dog doesn’t chew on these items or kick them to the side and eliminate on them. If the dog does this you may need to not leave any bedding in the crate.Give the dog something to chew on, such as a toy. Make sure that the toy is a sturdy one that will not break or be digested by the dog while he is in the crate with it and you are unable to supervise him.
If you are consistent, the dog should quickly learn that the crate is a nice place to be—he gets to lie down in a soft spot and gets to chew on something he enjoys. Dogs who are “housetrained” with the crate tend to be less destructive with your household items when left out of the crate because they associate chewing with being in the crate. Puppies under
12 months of age should still be supervised in the house however because the teething stage is a powerful stimulant for chewing. You can also feed the dog in the crate. Many dogs will eat their dinner and cuddle up and fall asleep in the crate. With puppies, you will need to wake them up to take them out to eliminate, and then you can bring them back to the crate to go back to sleep.

If your dog shows anxiety about being in the crate, crate him for very tiny increments. Let him in the crate for 5 seconds and let him out. Repeat. When he appears calm for the 5 seconds, increase to 10 seconds. Repeat. When he has learned to be calm with 10 seconds, increase to 20 seconds, and so on. Do not lock him in the crate and leave if he is anxious. You can also feed an anxious dog in the crate -split his meals up into ten portions, and feed him each portion stretched out during the day to increase the positive association with the crate. Let him out immediately after eating. For his last meal of the day, make it a particularly good meal by adding some sprinkled cheese, or a dab of peanut butter, or some beef or chicken broth to his kibble, and then put it inside the crate and shut the door with out letting him in. Wait a minute or two to get him eager to enter the crate and then open the door to let him have his reward. It won’t take long before most dogs will be begging to be let in their crate!

Another method for helping a dog to enjoy the crate is through the use of toys that you can stuff with food such as the Kong, Busy Buddy or Buster Cube, among others. You can stuff the hollow rubber toys with food treats and then give the toy to your dog when he goes in the crate. Most dogs will become very xated on getting the food out of the toy and will forget about the fact that they are in the crate. You can stuff these toys with a little bit of peanut butter; cream cheese, cheese wiz, cottage cheese, applesauce, plain yogurt, dog biscuits, etc. Be creative! You may even try to freeze it, as this makes it harder for the dog to get the food out and increases the time his attention will be occupied.

Another method for acclimating your dog to the crate is to set him up in the crate with some toys and then set the crate near where you will be. For example, if you are sitting down to read the newspaper in the kitchen, set the crate in the kitchen where the dog can see you, and then sit down and read. If you planning on watching a TV show, set the crate up near the couch and proceed to watch your show. Intermittently talk to your dog in a calm, happy tone of voice to let him know he’s being a good boy for calming lying in the crate.

Once you have successfully trained your dog to accept the crate, you can leave the crate open in your house. You may nd that your dog will go into the crate and lie down there on his own with the door open, as dogs are “den” animals and instinctively enjoy a nice cozy place they can snuggle into and retire from the world.

Other Don’ts:
Don’t leave your dog’s collar on when he is crated. A collar can catch on the metal grating and accidentally injure the dog.
Don’t put the crate in a high traffic area of your house. Find a nice, quiet area for your dog so he will not be overly stimulated by noise and activity passing by him.
Don’t let children, adults or other animals in the home tease the dog in the crate.
Size of Crate:
The crate should be big enough for the dog to stretch on his side, and get up and turn around without his head hitting the top. A crate that is too big is better than one that is too small.

For an adult dog, measure from the tip of the dog’s nose to the base of his tail for the proper crate length, and from the ground to the top of his skull for height. For puppies, do the same, and add about 12” for his anticipated adult height. With puppies, you may want to block out the extra area of the crate so that he does not eliminate in the far corner. You can buy a smaller crate and buy a new, larger one when he becomes an adult, but many crates can be bought with “dividers” so that you do not have to buy a brand new one when your dog grows older.

Crates come in wire mesh or in plastic “Varikennels” that have a wire grating on the door and along the sides. The wire mesh crates are usually collapsible which makes for easier storage, and you can easily place a blanket or towel on top of them to provide more privacy for the dog. Either crate works ne, although we prefer the wire mesh crates.

Taking Your Dog to the Beach

With sunny days and warmer weather, many people want to grab their dog and head…

Why do dogs bite? Dogs bite for a variety of reasons, but most commonly as…