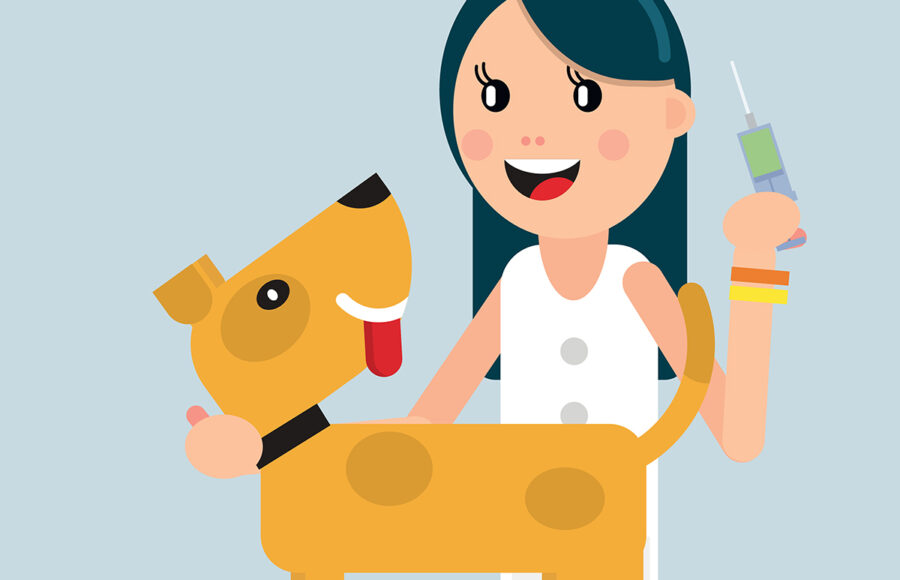 Rabies is a deadly disease caused by a virus that attacks the nervous system. The virus is secreted in saliva and is usually transmitted to people and animals by a bite from an infected animal. Less commonly, rabies can be transmitted when saliva from a rabid animal comes in contact with an open cut on the skin or the eyes, nose, or mouth of a person or animal. Once the outward signs of the disease appear, rabies is nearly always fatal.

What animals can get rabies?

Only mammals can get rabies; birds, fish, reptiles and amphibians do not. In the United States, most cases of rabies occur in wild animals—mainly skunks, raccoons, bats, coyotes, and foxes. In recent years, cats have become the most common domestic animal infected with rabies. This is because many cat owners do not vaccinate their cats and cats can be exposed to rabid wildlife, either outdoors or when bats get into the house. Rabies also occurs in dogs and cattle in significant numbers and, while not as common, has been diagnosed in horses, goats, sheep, swine and ferrets.

All mammals are susceptible to rabies.

Vaccination programs and control of stray animals have been effective in preventing rabies in most pets. Approved rabies vaccines are available for cats, dogs, ferrets, horses, cattle and sheep. Licensed oral vaccines are also being used for mass immunization of wildlife, particularly raccoons.

What are the signs of rabies in animals?

Once the rabies virus enters the body, it travels along the nerves to the brain. Animals with rabies may show a variety of signs, including fearfulness, aggression, excessive drooling, difficulty swallowing, staggering, paralysis and seizures. Aggressive behavior is common, but rabid animals may also be uncharacteristically affectionate. Horses and livestock with rabies also may exhibit depression, self mutilation, or increased sensitivity to light. Rabid wild animals may lose their natural fear of humans, and display unusual behavior; for example, an animal that is usually only seen at night may be seen wandering in the daytime.

Rabies infection of an animal can only be confirmed after death, through microscopic examination of the animal’s brain.

How great is the risk of rabies to humans?

Rabies remains a major concern worldwide, killing around 59,000 people every year. Almost all of these deaths are due to rabies transmitted by dogs in countries where dog vaccination programmes are not sufficiently developed to stop the spread of the virus.

Rabies vaccination and animal control programs, along with better treatment for people who have been bitten, have dramatically reduced the number of human cases of rabies in the United States. Most of the relatively few human cases in this country have resulted from exposures to bats; any contact with bats, even if a bite was not noticed, should be reported to your physician. Extremely rare cases have resulted from corneal or organ/tissue transplants from an infected donor. Dogs are still a significant source of rabies in other countries, particularly in Asia and Africa, so travelers should be aware of this risk and seek medical advice about vaccination prior to traveling outside of the United States.

What can I do to help control rabies?

Remember that rabies is entirely preventable through vaccination.

What if my pet has bitten someone?

What if my pet has been bitten?

What if I am bitten?

Bait containing rabies vaccine is commonly used for mass wildlife immunizations. The bait does not pose a health risk to you or your pets, but it is best to leave the bait undisturbed.​

Observe World Rabies Day​ on Sept. 28 to help raise awareness about rabies and the importance of rabies prevention.

From American Humane Society Pet Disaster Preparedness When disaster strikes, it is crucial that you…

Taking Your Dog to the Beach

With sunny days and warmer weather, many people want to grab their dog and head…

From AVMA.COM Q: What are vaccines/immunizations? A: Vaccines are health products that trigger protective immune responses in pets…